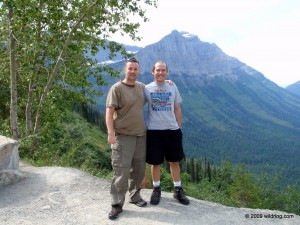 InÂ  September 2008, I mentioned to my friend Dave as he left Franklin that I’d be visiting him the following summer at his new home in Kalispell.Â  Summer came and I hadn’t prepared even one second.Â  I knew what I had to do.Â  Just go online, book the flight and I would begin to prepare.Â  Around the end of July I set the dates, got the flights and thought a month would be plenty to do just that.

Little did I know I would be filling in for a client on an emergency, on-call basis for most of the month of August.Â  That was in addition to my regular duties and projects under deadline.Â  How did I feel?Â  One word: frustrated.Â  I had wanted to book this trip for a year and what I thought was adequate time to plan was reduced to an hour here and there before bed.Â  Finally, I was able to get the situations stabilized with my client and get some coworkers to help me manage the remaining issues.

I don’t regret not planning more.Â  Montana will not be planned.Â  Any amount of pouring over maps and guidebooks is horribly inadequate.Â  So after packing in one night for a 10 day hiking and backpacking trip, I left the humidity of Tennessee behind for Big Sky Country.

The flight from Nashville to Kalispell via Salt Lake City was uneventful, just the way I like it.Â  It was a cool 68 degrees when I arrived in the Flathead Valley.Â  Dave picked me up and we were off to Snappy Sport Senter and Walmart for supplies.Â  We stopped by his beautiful home to get cleaned up and then he, his lovely wife Natalie, his two boys and I headed to MacKenzie River Pizza Company for dinner.Â  Dave and I split (and I highly recommend) the Highlander (pheasant sausage and roasted potato pizza).

I wanted to include Dave in whatever I did on the weekends since he had to work during the week.Â  Initially we were going to overnight Triple Divide Peak on Saturday night, but with my sniffling getting worse we decided to day hike to Iceberg Lake instead.Â  So glad we did.