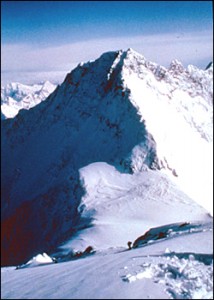 The final outdoor show that caught my attention this season (enough to warrant a Tivo Season Pass anyway) was another Discovery Channel series called Everest: Beyond the Limit. Another docudrama or extreme reality show, it follows the expedition team of world renown leader Russell Brice over many weeks to the summit of Mt. Everest. The Discovery Channel did an excellent job of capturing the expedition, with Sherpa cams and other such gear.

Each of these guys forks over $40,000 just for the expedition, the permits, the Sherpas, the supplies. That doesn’t even get them near the summit at 29,035 ft above sea level! They train and put themselves at a place on earth where they can’t get enough oxygen and where their bodies prefer to eat their own tissue rather than metabolize food for energy. Talk about dedicated! Talk about passion!

This was shot during the early climbing season of 2006. Any of you that follow Everest know there was quite a bit of controversy and disaster that year and I won’t delve into that.

I thought the series was professionally done, as are most Discovery Channel productions. They definitely held my attention with intrigue and suspense. As I usually say about these things, how much of this is real and how much is staged? David Sharp’s last moments, caught on camera by the Discovery Channel, I’m certain wasn’t. But the drama of Medvetz not aborting the climb when commanded by Brice? Come on!

What’s your take on Everest: Beyond Limit? Let’s not turn this into a debate on the season or on Brice.