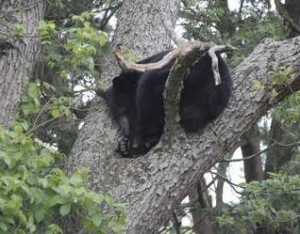 Welcome back, black bears. Tennesseans hunted out the black bear in most of the state long ago. They’ve survived in the mountains of East Tennessee and have been relocated to Big Fork South on the Cumberland Plateau. But thankfully they’re returning to Middle Tennessee. TWRA is confirming the sighting of a black bear in Hickman County, west of Nashville.

Bears needn’t be feared as long as you respect them and give them plenty of space. Bear hunting in Middle Tennessee is not permitted. This is a beautiful, regal animal. Misbehaving bears are usually responding to idiotic human stimuli. 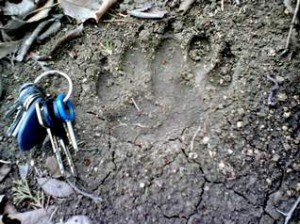 UPDATE 3/28/2008: Originally the theory was this bear came from Mississippi or Arkansas. But according to the Tennessean, tracks were reported to TWRA in Cannon County about a week ago. They’re now speculating this bear came from the east from the Cumberland or Appalachian Mountains.

I hope this is the beginning of a new herd here in Middle Tennessee. I believe that man can live in relative harmony with bears as long as we get them plenty of space and respect. If so, let’s learn from our neighbors in the Smokys about how to peaceably coexist with this majestic animal.